In 2000, I joined with BYU professors Robert Todd (Mechanical Engineering) and Michael Ware (Physics) to develop teleprompters for use in large arenas. Advantages to our technology include increased brightness coupled with narrow viewing angle. Because the prompter is so large, it can be placed far from the podium. This enables TV cameras to get a nearly straight-on view as the speaker reads the text. Others away from the podium cannot read the text, and audience members see virtually no evidence that anything is being displayed on the screen. The system utilizes a compact projector, flat mirrors, a plastic Fresnel lens, and a plate of tempered glass above the unit. (Alternatively, the screen can be tipped up and viewed directly with no glass.) The light is directed exclusively towards the speaker, which is related to the fact that the image is so bright. This is the world's first transparent teleprompter bright enough to be used outdoors. The speaker stands far in front of the device. Smaller versions can be made for closer use. 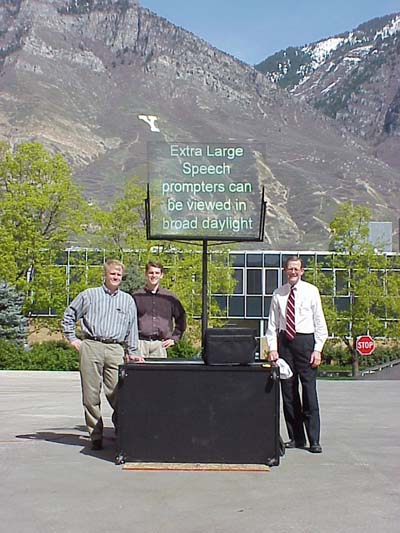 In Dec. 2004, BYU was granted a patent for the device (U. S. Patent No. 6,834,968). In 2006, I purchased the patent from BYU and licensed the technology to a start-up company Jumbo Bright Prompters, for whom I am the product developer. We have designed several prompter sizes that are very modular and portable compared to the original units.