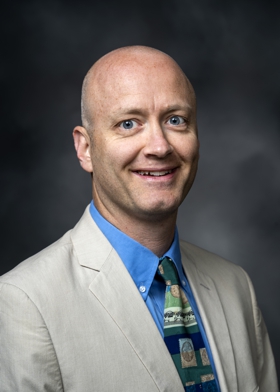 Kent L. Gee, Professor of Physics and Chair of the Department of Physics and Astronomy, joined the faculty at Brigham Young University after completing his PhD in Acoustics at Penn State in 2005. His primary research emphasis is the characterization of high-amplitude noise sources and fields through data analysis and imaging methods and has published 100+ articles and proceedings papers in these areas. His research group, the Physics and Aerospace Student-Centered Acoustics Laboratory (PASCAL), typically consists of 4-6 graduate students and 8-12 undergraduate students.

Some of his research highlights include:

In 2010, Kent received the R. Bruce Lindsay early career award from the Acoustical Society of America “for contributions to the fields of jet noise propagation, nonlinear acoustics, and active control of fan noise.” He was named an ASA Fellow in 2015 for "contributions to jet-noise and nonlinear propagation." In 2011 and 2015, he received a Brigham Young University Young Scholar Award and Lawrence K. Egbert Teaching and Learning Faculty Fellowship, respectively.

In addition to his high-amplitude noise work, Dr. Gee has also published in other areas of acoustics including noise control, where he holds one patent with others pending, near-field acoustical holography, vibroacoustics of musical instruments, and in the development and analysis of physics education demonstrations.

Beyond the traditional university laboratory environment, his activities as a scientist-citizen include mentoring multiple undergraduate students and outreach to more than 3500 K-12 students and members of the public through tours and demonstration shows.   After serving as Editor for nine years, Dr. Gee is presently Assistant Editor of the Acoustical Society of America's Proceedings of Meetings on Acoustics.