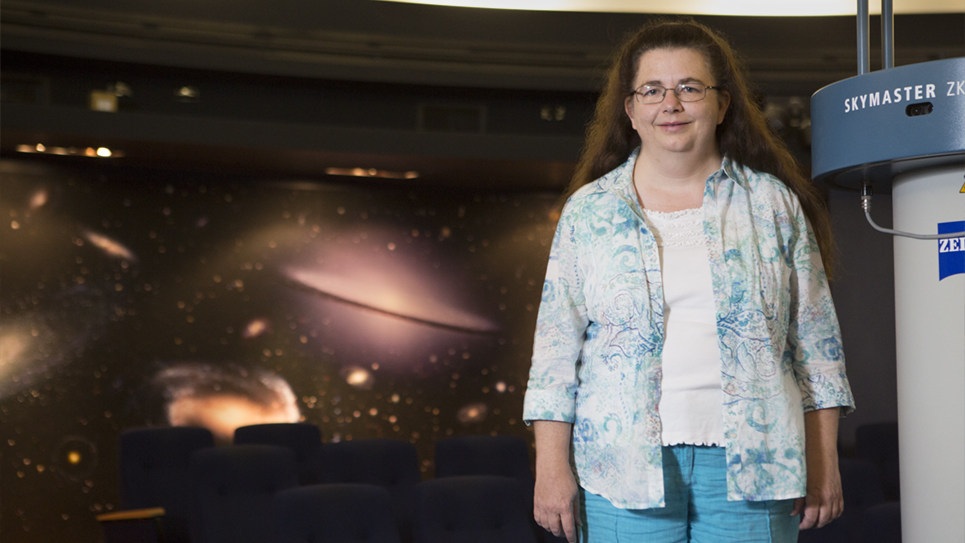 While most kids her age didn’t know what they wanted for dinner, eight-year-old Jeannette Lawler already knew she wanted to be a physicist.

“I grew up in the moonshot era,” Lawler said. “I built my own cardboard box Viking Lander to play in as a rug rat.”

With her passion for science, Lawler went on to get a science teaching certificate and a PhD in nuclear physics. She now works as the Physical Science 100 coordinator and planetarium supervisor at BYU, while also collaborating in research on head-mounted displays—specialized glasses—to be used as teaching tools for deaf students.

As the PS100 coordinator, Lawler has overseen changes to the curriculum that reduced the student failing rate from 15 percent to half that amount.

“That’s about 200 students who ended up retaking the class, “Lawler said. “Now, the number of students that are getting Ds and Es in the class was cut in half, [and] we saw improved student performance . . . on every single test.”

Along with her coordinator position, Lawler is also in charge of running and maintaining the Royden G. Derrick Planetarium in the Eyring Science Center.

“I like to say I get to be the queen of the universe,” Lawler said. “I can turn the stars on and off with the motion of my finger.”

During the time she has worked there, the planetarium has been remodeled and has gained a new optical and digital projection system, and the Department of Physics and Astronomy has added a new course to formally train students on how to use the planetarium, giving them important job skills.

“A good number of the positions available for people . . . with a bachelor’s in astronomy are in informal education and outreach, “ Lawler said. “Having the planetarium and public outreach experience . . . adds a nice employable skill to what the majors are doing.”

The planetarium is not only used as an outreach venue—it is also used as a student learning lab and research lab.

“That’s where we’re doing the research on using head-mounted displays for an accommodation device for deaf kids,” Lawler said. “A planetarium’s . . . lighting is low, which makes it difficult to see an interpreter on the floor, and you want to be looking at the cool media on the ceiling as well.”

The head-mounted display would stream a video of the interpreter onto the computer monitor that the student wears like glasses. These will allow the student to watch the American Sign Language (ASL) no matter where he or she looks.

“Nobody has had a way of taking ASL and slapping it on top of other visual information,” Lawler said. “The head-mounted display gives you the ability to do that.”

Lawler has teamed up with the Department of Computer Science in order to test head-mounted displays and to better determine their functionality and benefits.

“It’s brand new technology,” Lawler said. “Nobody has done the cognitive science studies to find out when it’s a good idea, when it’s a bad idea, and when it’s completely neutral.”

Lawler is excited about the work she gets to do, and she attributes much of her success to the BYU student employees who work with her.

“The reason that things work is because BYU has excellent students,” she said. “It’s a pleasure working with the BYU student population.”